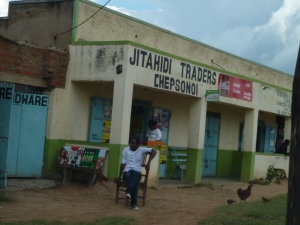 Ruth arrived early morning again with a pan of hot water and a thermos of boiled milk. This time, however, I was already up and feeling much better. I asked for eggs and toast.

I also finally asked about the sounds I was hearing in my room at night.

It was such a simple statement, yet so disturbing.

“Don’t let it bite you,” she added on her way out, “or you will need strong medicine. They use this place to store maize, you know. The rat is looking for food.”

I was still mulling over the rat business when Ruth returned, moments later, to announce, “The dean of students will see you right now. I will take you there.”

She waited while I got dressed and gathered my gear: paper, pens, tape recorder, digital camera, Flip video camera, and my borrowed cellphone. It felt quite strange to have access to all of that technology in such a remote area.

Meshack Musindi was waiting at his desk when I arrived, and when we were done with the interview, I returned to my room where I had arranged to talk with Ruth about her experience as a student. When I concluded my conversation with Ruth, I considered myself finally finished with my interviews. I didn’t know yet what I was going to write, but I was feeling pleased with the source material I had to work with, and I was also looking forward to turning my attention to my own work.

I was feeling much better physically, too, and hungry for the first time in days, so I fixed myself a real lunch – some cheese and crackers, dates, leftover rice and chicken from when I’d first arrived, a chocolate bar and digestive biscuits, plus two more glasses of that magical, fluorescent orange liquid.

I had arranged with Silas to go on another guided walking tour of Kaimosi that afternoon, this time all the way down to the Galigoli River and dam. I went to his office to meet him, and got to talking with his boss, Josphat Lime Jiveti, the finance officer, about memories from when I was a kid in Kaimosi. I told Josphat I had lived in the house directly across the road from the College. When I asked about my old neighbors, Rose and Rufus Adede, I was told that both of them had died some years back. The news was quite a shock.

I told him I remembered two people who helped care for my family back then. One was a man named Musa. Both Josphat and Silas shook their heads; didn’t remember him. The other person, I told them, was a man named Simeon.

A jolt of electricity seemed to crackle through the room

“Simeon,” said Josphat, “is my grandfather! His name is Simeon Mwanga, and he used to take care of families in that very house where you lived!”

It seemed miraculous to make such a connection after all of these years. Then it got better.

“He is still alive, you know,” said Josphat. “He is 97 years old! He has been at the hospital for a foot infection, but he is back home now at his shamba in Chepsonoi. Would you like to see him?”

Of course I would! But I told Josphat that I was only going to be in Kaimosi a few more weeks. Did he think it would be possible to coordinate a visit in that time?

“I am taking you to see him tonight,” he said.

Silas wanted to get lunch before we headed out on our walking tour, so he took me first to the dining hall to join the rest of the school. I had already eaten a large lunch and I was feeling quite full and still a bit queasy, so I told Silas I didn’t need any lunch. He wouldn’t hear of it. He returned from the kitchen with a metal plate stacked with a huge mound of rice and large chunks of tough, fatty beef. We weren’t leaving until I ate it all.

But finally we were off on our walking tour, this time down to the Galigoli River, where there used to be a saw mill and power station, both of which have long been out of commission, destroyed by neglect after the government took them over from the mission. We visited the Teacher Training College,

the chapel, the Kaimosi Friends Primary School (now a large day and boarding school on the site of my old two-room mission school),

the Kaimosi Hospital (picked up a package left there for me by Eden Grace, and visited with a nurse who worked at the hospital when I was a boy. I told her I had spent a night in the hospital for a broken collar bone back then, and she said yes, she remembered that. Possible, I guess – people I’d met so far have had extraordinary memories of those days.)

I talked with people all along our walk (including a retired minister out with his cows and grandchildren), and nearly everyone who heard my story said, “God has brought you home to Kaimosi. You have come home.” It certainly felt as though I’d come home.

When I got back to the college, Josphat was ready to go. Evidently “tonight” meant “this afternoon.” We took the College truck and after less than an hour on a paved road we turned onto a very narrow dirt road down a very steep hill that eventually landed us at Simeon’s shamba with cows and chickens wandering the yard.

While I sat in the front room – dirt floor, mud walls – Simeon’s wife, children, grandchildren, and great grandchildren gathered to sit with me while Josphat went to dress his grandfather and bring him out to visit. His wife led us in prayer while we waited, again when Simeon arrived, and again when it was time to leave.

The visit was short but emotionally powerful. Simeon was clearly tired and in pain, but he was also alert and communicated through his grandson his appreciation that a child he had cared for so long ago had come back to say thank-you.

For most of the drive back to Kaimosi I was silent, greatly moved by the ever-deepening sense of homecoming that has filled this trip.

Next: I go to the Hill of Vision