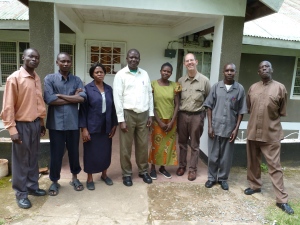 With the FTC Church Administration class

I missed morning chapel again, not able to get up and dressed in time. I did make it down, though, for my 8:30 interview with John, academic dean of Friends Theological College who also taught Christian Worship and Systematic Theology 1. My head still felt wrapped in a blanket of pain and exhaustion, and I had to concentrate on each step I took to keep from tripping or falling, but the interview went well and I hoped that its momentum would help carry me through the day.

From there I went straight to Hesbourne’s class on Church Administration, and ended up talking with his students for nearly three hours, with a break in the middle for tea. It’s hard to know how useful any of what I had to say might be, but they certainly were fascinated by a glimpse into western un-programmed Quaker practice, both the religious and business aspects.

The lack of a pastor in charge, the acceptance of ministry by anyone moved to speak, and the idea of decision-making by committee and consensus all appeared to be quite baffling. When I told them there was no collection plate passed during service, they laughed in disbelief. They were eager for ideas on how to raise support for their churches, but I ended up feeling that little of my U.S. experience in fundraising had much relevance in a setting where a generous donation might be a chicken. Still, the discussion was fun and spirited, the students were very sharp, and the time passed quickly. Then it was back to bed.

A little before 3:30 I got up and made my way up to the hill to the home of the principal to interview her. I was originally going to talk with her and the dean of students earlier in the day, but when I got to their offices all the power was out and no one was there, so I rescheduled. I was feeling even worse after my nap, but Ann served me some tea, which seemed to settle my stomach a little. We had quite a wide ranging and interesting conversation, touching on the history and challenges of the theological college, Kaimosi hospital, and other institutions at the mission.

I hadn’t been able yet to reschedule an interview with the dean of students, and he was leaving the next day for term break, but by the time I was wrapping up with the principal, I was so worn out that I just went back to my room and fell asleep again. At some point I heard knocking at the door. I knew it might be the dean, but I found I didn’t have the strength to rise or answer.

I had become quite concerned about my health, and was beginning to fear my stay in Kenya could end up in jeopardy if I didn’t start feeling better soon. When Ruth arrived at 6:00 to ask about dinner, I again told her I wasn’t hungry. She asked if I was drinking the juice she’d told me about.

I didn’t remember her telling me about any juice. She went into the kitchen area and pulled down from the top shelf a plastic bottle that held some liquid that was a violent, metallic orange.

“You must drink this! Put a little in a glass and add water.”

After she left I studied the bottle’s label. It hardly looked promising. The product was called “Excel Quencher Orange Flavoured Drink Dilute to Taste.” It looked precisely like radiator or wiper-blade fluid. At the bottom of the label read the words, “Manufactured by Excel Chemicals, Ltd.”

I diluted a bit and drank it down. It tasted just like the orange flavoured chemical concoction it was. I fixed and drank a second glass and went back to bed.

Except for the return of whatever animal continued to rummage through my bags in the night, I slept soundly and awoke in the morning feeling better than I had in days.

Next: an extraordinary surprise visit